In the last post I set up a runner. Now lets see if we can use it to create a container.

I am looking into how my colleagues at Cambridge do things. They have a handy guide to the Google cloud using what colleagues call click ops. When I ran through it I was given a project which already had an ID, so had to make sure I used the project ID I was given rather than the one in the document. This also applied to the project registry.

This gives a quick overview of what is available on the cloud - how to create an application and connect it to a database, create users and allocate memory and CPU. It isn’t how you would do things in production though - you would create a project in git and use automation to deploy it.

In the University we have our own instance of GitLab. This is actually quite a complex piece of software. In addition to hosting git projects, it supports automation of the build and deploy phases, which is quite useful. This is what I will use to orchestrate the build and deploy of an application.

My colleague set me up with a project which deploys the default container with a picture of a unicorn. So I decided to try to deploy etherpad as in the tutorial. To do this, I needed to create a project to create the container. I created a project called etherpad-test in gitlab, and in the project I created a dockerfile as suggested in the tutorial:

Then we need to tell Gitlab to build the file. This was largely copied from another project.

The two includes are public, and can be viewed at the University GitLab

This will run the Auto DevOps pipeline, pretty much with the defaults. I have switched off the documentation and tests because there aren’t any. Let’s have a look to see what happens. 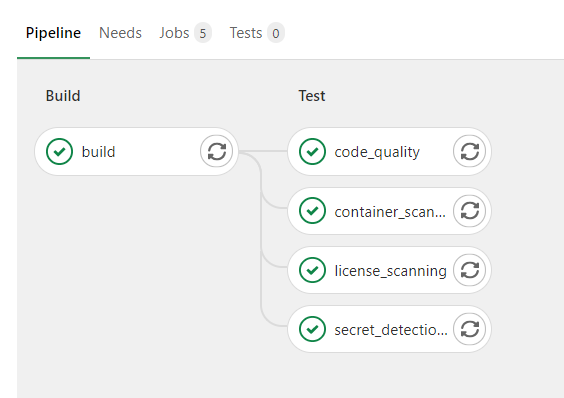 The pipeline detects the Dockerfile, generates the image and runs some tests and analysis on it. Nice!

Looking at the log for the build step, we can see that the Docker image is pushed to a repository:

The next problem is how we deploy this. I will look into that next.