It seemed reasonable when specifying the repositories, to have three (at first):

The problem is that when the developer commits code to his repository, they would like it to be deployed to an environment so they can test it. It makes sense to do this automatically, we have all the information about the environment in the environment repository. This is different to the repository where the code is being checked in. It would be nice if we could call across to that and trigger the automated deploy.

The way to do this seems to be to call a pipeline. At first glance it is difficult to know how this helps, as it is only possible to define one pipeline per environment, in the .gitlab-ci.yml file. However, the power is in variables. If a variable is defined in the calling repository, it can be read in the one that is called. I decided to test this out.

First I created a repository: psh35/citest to be triggered.

This defines a single stage, deploy. There is a single job within it, which creates a step to echo a statement, and print the environment. This runs if a couple of conditions are met: The variable DEPLOY_DEV must be equal to true. This is set in the calling process, and is the indication we want to deploy to dev rather than another environment, which will be useful if I create extra jobs in this stage, as I intend to. Next I check that REPO_TICKED is equal to TRIGGER_TICKET. These are also variables which I create in the GitLab CI settings. I set it to the same random string in both environments to ensure that nobody can trigger the build accidentally by (e.g.) cloning the triggering repository.

The pipeline defined above is triggered by this one:

So again there is a single deploy stage, with a single job, and its only action is to trigger the pipeline. It sets the DEPLOY_DEV variable, and also sets the TRIGGER_TICKET to REPO_TICKET, which is defined in the CI settings for the repository. 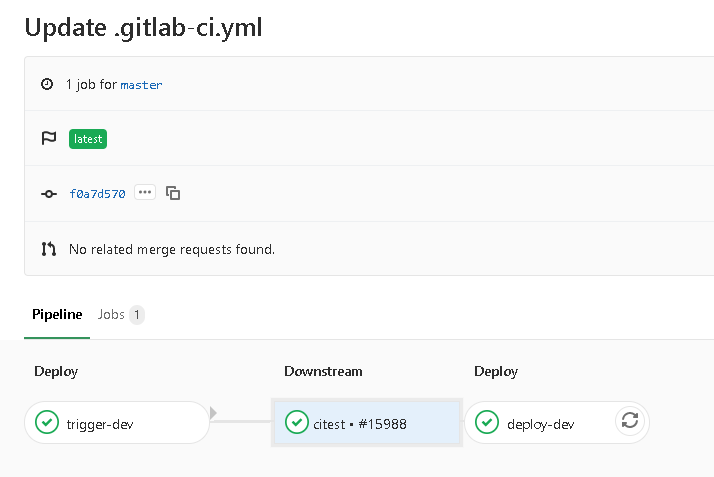 We can see in the image that my update of .gitlab-ci.yml has triggered a pipeline in the triggering repository. The trigger-dev job has run and called the citest pipeline. What is nice is that clicking on the citest button reveals the deploy stage from the citest repository, and clicking on that will show the log.

When triggering a pipeline, it is done as the user who did the commit, and uses their permissions within GitLab. Therefore, everyone who can trigger a pipeline in the code repository, also needs permission to run the pipelines they are triggering.

So it is fairly easy to call one repository from another in GitLab… Once you know how! I have put a little thought into security so the API can’t be triggered accidentally. This also means I can unset the REPO_TICKET variable should I wish to do maintenance on the repository without triggering the downstream pipelines. All in all, I am quite pleased with what I have done!