A new feature of 8.58 is the silent installation. The documentation says you can run a command such as:

The customizations file is optional, but I decided this time around to use it as much as possible to create a system as close as possible to what I wanted to end up with. So I copied the file from <psft_base_dir>/dpk/puppet/production/data/psft_customizations.yaml and edited it to my satisfaction. <psft_base_dir> above is whatever was specified when the installer asked interactively, or in the response file. This means I had to do a test install before I could do a proper one, but that is fine.

The deploy type is still specified on the command line. I had assumed this could be done in psft_customizations.yaml, but it can’t. So the command becomes something like

I was confused for a while by the passwords. Appendix D of PeopleSoft PeopleTools 8.58 Deployment Packages Installation explains that the passwords are created using eyaml encrypt using public and private keys. But these keys are created by the install, so passwords can’t be created before the install, but also need to be created before the install to populate psft_customizations.yaml. I realised this generally isn’t required. Passwords can be provided in the clear in setup.txt, so there is no need to encrypt them!

I was also stumped by an error that seemed to indicate a coding issue:

It seems this is caused by setting the db_host_name variable in psft_customizations.yaml. It isn’t clear what this does, but it isn’t needed so can be removed. Then the install runs without issue.

There does seem to be an error in the operator password validation. It is restricted to 8 characters without punctuation. This is not complex enough for my liking. So I supply a dummy password in the response file. Once the installation is complete I edit the config files (psappsrv.cfg and psprcs.cfg) to add the password in clear text. Then I run a configure to encrypt them. I could also use expect to drive psadmin, but that won’t work in windows.

I had an annoying error when installing the PIA using a response file:

The installer sets the value of COBDIR to blank in the .bashrc file. It is set correctly in .bash_profile, but since variables such as LD_LIBRARY_PATH are set in .bashrc, they end up being wrong. Peoplesoft can’t find the cobol installation, so can’t run cobol programs. This can be tested by navigating to the peopletools debug utilities at PeopleTools->Utilities->Debug->PeopleTools Test Utilities.

Clicking the remote call test button puts up an error: 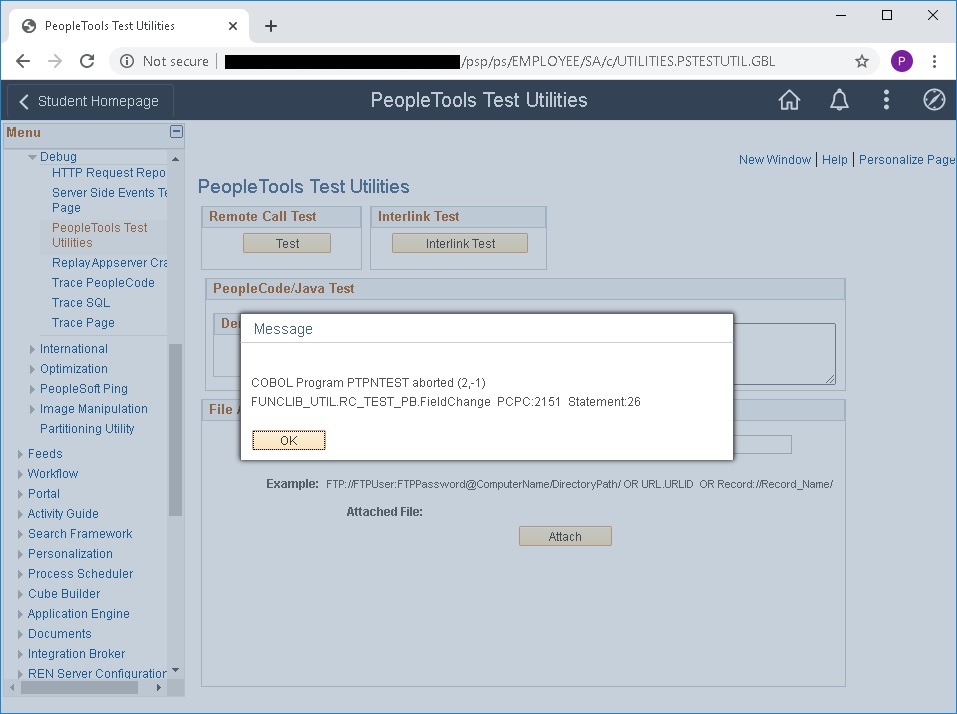 The workaround is quite easy, simply edit /home/psadm2/.bashrc to change

In windows, the psadmin menu allows a service to be created. This can be scripted as follows:

Edit %PS_CFG_HOME%\appserv\pswinsrv.cfg to add the process scheduler domain to the list, e.g.

If there is more than one, they are comma separated as per the comment in the file. Then run

The service then needs to be edited to be run as the correct user (that installed the software). I use win_service in ansible to do this:

It can also be done by hand.

The user needs to be able to log in as a service, by granting SeServiceLogonRight to the user.

Having worked around the above issues, I am pleased with this method of installation. It seems to work well, and has fewer issues than my previous approach of trying to customise a default installation.